The first American stopover for the Energy Observer

Energy Observer is a French project that set sail from Saint-Malo in northern Francein 2017 on a 7-year expedition around the world. 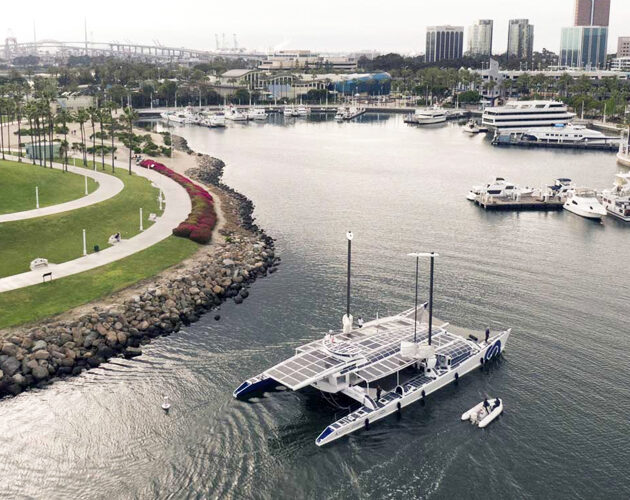 After a 27-day sea passage from the Galapagos Islands, a Unesco biosphere reserve, having covered nearly 3,000 nautical miles entirely self-sufficiently, Energy Observer navigated the Los Angeles River, greeting the majestic ‘Queen Mary’ along the way. Full of contrasts, the symbolic encounter echoed the sea change in operation between the past maritime world and its carbon-free counterpart of the future: going from an historic ocean liner to a zero-emissions laboratory vessel, which draws its energy from nature whilst preserving it.

Receiving a warm welcome from the French Consulate in Los Angeles, the Port of Long Beach and the California Fuel Cell Partnership, the crew helmed by Victorien Erussard brought the catamaran alongside at Pine Avenue Pier in Long Beach.

The hydrogen is stored in carbon fiber tanks, under pressure (350 bars). The advantages of the Energy Observer boat are: zero emissions (no CO2 or fine particles), silent, and greater density of power and energy than with an “all-battery” solution.

“It is an honor and a great pleasure to welcome Energy Observer here in the Port of Long Beach, Southern California. This region is developing many renewable energy initiatives with bold goals. The city of Los Angeles has recently stated its ambition to be the transportation technology capital of the world. We are delighted to be able to introduce the Energy Observer, this incredible laboratory for the ecological transition, to Californians and French residents of California. This stopover will help strengthen collaborations between French and American stakeholders to fight climate change together, in the context of the welcomed return of the United States to the Paris Agreement.”