An outstanding result of the collaboration between Ingersoll Machine Tools and Innse-Berardi. 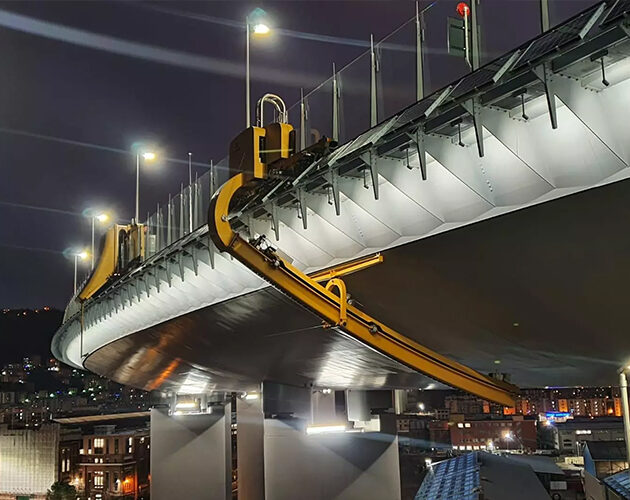 The Camozzi Group and the Italian Institute of Technology have designed and built a robotic system, one of its kind in the world, to contribute to the safety of the new bridge in Genoa.

The robotic system will be verifying the integrity of the infrastructure using cameras and sensors and will allow operators to intervene with preventive maintenance actions through data processing algorithms.

The construction and assembly of the robots, one of their kind in the world, which will be helping to make the Genoa San Giorgio Bridge safe, has been completed. The devices, designed by Istituto Italiano di Tecnologia (IIT) and built by the Camozzi Group, commissioned by the Temporary Association of Companies established by Seastema S.p.A. and Cetena S.p.A. (Fincantieri Group), will be contributing to the safety of the new bridge in Genoa regularly performing an automatic monitoring of the infrastructure by using cameras and sensors. The 4 robots – 2 Inspection Robots and 2 Washing Robots – are operational since last autumn, as installations servicing the system has been completed.

The robotic system is based on the installation of the 4 robots on the sides of the bridge: 2 of them will be in charge of inspecting the lower surface of the deck and processing the data in order to find any anomalies (Robot-Inspection) and the other 2 will be cleaning the wind barriers and solar panels (Robot-Wash). This robotic inspection system is the first automatic system in the world and provides a replicable model at the global level designed to enhance the safety of this type of infrastructure and of any civil works that may require automatic monitoring.

The 4 robots are made of carbon fibre structures, actuators and electronic components. In particular, the single-piece beams that will enable deck inspection have been made by transposing technologies that are typical of the aerospace and aeronautical industries and were built using 3D moulds created by the technology of the largest 3D printer in the world made by the Camozzi Group, the MasterprintTM machine.

The robots will be sliding over the bridge’s outer rails where they will allow operators to verify the infrastructure’s integrity sending the images and data acquired to a control room, thereby creating a digital database that, thanks to efficient analysis and prediction algorithms, will allow the operators to intervene with preventive maintenance actions, as required.

The robots, designed using IIT’s know-how in the field of industrial robotics, were built thanks to the ten-year experience of the Camozzi Group in production technologies and in the construction of sophisticated machinery employed in the aeronautical and aerospace industries. Success was achieved only due to the synergies created by the various enterprises involved in building a robotic system that is characterized by reduced weight, high structural stiffness to bear the sensors’ weight, low resistance to wind and good aesthetic quality. The robots will be operated from the control room via a Wi-Fi network. They are powered by batteries and charging stations have been spaced every 200 meters on the sides of the bridge.

Furthermore, in the event of adverse environmental conditions the robots are capable of interrupting operations and can safely reach their charging stations thanks to the anemometers and accelerometers with which they are equipped.

The system combines the strengths of automation in modern mechatronic mechanisms, an area where Camozzi has a considerable experience (especially in conjunction with industrial automation), with the autonomy of cognitive systems. In essence, an inspection system that uses completely independent “cognitive mechatronics”, which thanks to the four robots will be operating in addition to the control and maintenance activities already required by law. Moreover, thanks to its hardware and software versatility, the system can be implemented in the future with new technologies in such a way as to always be cutting edge.

A Robot Inspection weighs over 2,200 kg and is equipped with 82 wheels used for moving along two axes and is over 7 meters wide.

It is provided with a retractable arm for inspection consisting of a fixed part and a mobile part, both of which in carbon fibre. The arm has a reach of about 17 meters in total length so that it can touch the centre of the deck from the edge of the bridge. The external monitoring of the deck will be carried out precisely by means of the carbon fibre arm, which is capable of sliding along the entire length of the bridge retracting near the pylons; high-resolution cameras and sensors have been installed on it to measure surface conditions: i.e. paint deterioration, corrosion elements and state of the welds. The cameras will be transmitting images of the entire infrastructure in real time. Thanks to computational models, the data collected will be checked for the purpose of reporting any irregularities or anomalies.

A Robot-Wash weighs about 2,000 kg and has 56 wheels to distribute its load on the bridge edge; it is over 3.5 meters high, almost 8 meters long and is divided into two parts: one for cleaning and one for charging.

The Washing Robot removes dust and other debris from the photovoltaic system and glass wind barriers, which demarcate the lanes thereby maintaining the infrastructure’s efficiency and functionality. One of the robot’s peculiar features is its sustainable use of water resources. The water used for washing the structures originates from rain and other condensation water collected from the same infrastructure. The Washing Robot is equipped with sensors that monitor both the transparency of the glass wind barriers and the amount of water found on the surfaces. These two parameters allow the robot to determine when to intervene in order to clean the surfaces. In case of water shortage due to droughts and periods of low humidity, the Washing Robot is provided with a blower for the removal of particulates thereby contributing to maintaining the infrastructure’s efficiency while waiting for the right amount of meteoric water to be used for a more thorough wash.

The two robots will be regularly travelling along the edge of the bridge via tracks and drive wheels along the entire length of the viaduct of approx. 1,100 meters, depending on weather conditions.

The Role of IIT

The project originated from an architectural proposal of the firm “Renzo Piano Building Workshop”, which Istituto Italiano di Tecnologia transposed and expanded in 2018 by designing a unique robotic system prototype, later developed industrially by Camozzi. IIT donated the project to the City of Genoa and created a team of pioneering companies for its implementation, including the Camozzi Group.

The partnership with IIT started in June 2017 with the establishment of a Joint Lab, which initially focused on new materials and advanced robotics. The partnership has now expanded in several directions, the construction of the robots being one of the fruits of its progress.