The Hennecke Techcenter is open again 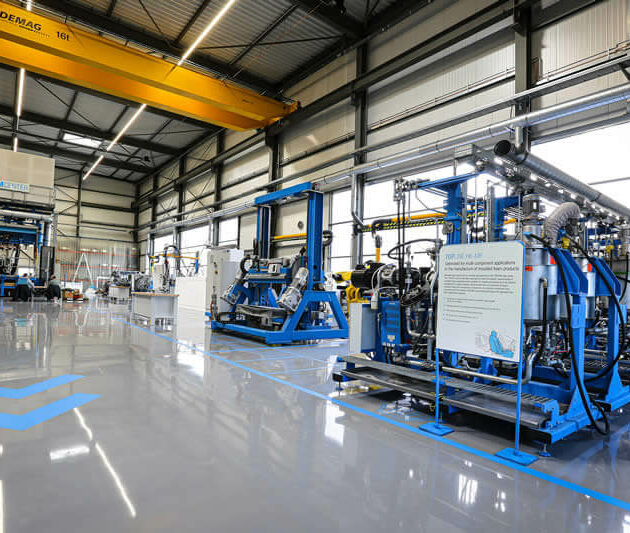 Quick and courageous action by the local fire services prevented the worst during the blaze at Hennecke’s research center (‘Techcenter’) at the Sankt Augustin site in summer 2020. Fortunately the fire did not cause any injuries or environmental damage. Due to the direct damage to the building and the indirect damage to the machine and plant technology, only emergency operations could be carried out for selected applications following the fire.

The extensive restoration work was completed in January. The team of application specialists and technicians are delighted that all applications areas in the Hennecke Techcenter are now fully available again. Hennecke also used the post-fire restoration work to expand capacities for customers and development partners. In line with the Hennecke Production System (HPS) – a modernized version of the well-known lean production system – the available space has been enhanced using modern shop floor management. This has led to better utilization and shorter distances within the 1000 square meter hall.

Many customers have also been eagerly awaiting the complete resumption of operations at the Techcenter. Work has already begun on the first product developments and trials. Customer demand remains high despite the restrictions of the corona pandemic. Testing capacities at the Techcenter in the first quarter of the year are already full.

About the Hennecke Techcenter:
At its headquarters in Sankt Augustin, Hennecke runs a fully equipped 1000 m² technology center. Here you can find a variety of different machines operated by application engineers, making it possible for interested customers to develop their own new parts or to redefine existing parts. Not only can prototypes be made for pilot production, and initial tests carried out on new products, but also existing products can be improved and reproduced using other production processes. Process technology engineers are actively involved in the development process and if necessary can also provide support services such as simulations or calculations.

Due to the growth in new application areas and more extensive processes, existing machines are constantly being designed, tested and further developed for serial production at the Techcenter.