The award-nominated rPET honeycomb material developed by EconCore, specialist provider of technology for cost efficient continuous production of honeycomb cores is being harnessed by the Formula Electric Belgium team for their Titan race car which was unveiled to the world end of May. 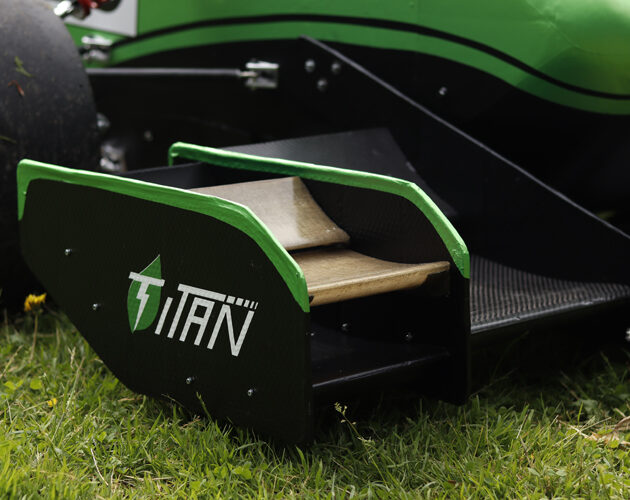 Based on recycled PET material, the rPET honeycomb cores are made up of 100% recycled material, predominantly sourced from non-food postconsumer and industrial PET waste streams to contribute towards overcoming the oversupply of these most problematic PET waste streams.

Due to its hugely advantageous mechanical performance, low weight and high temperature stability, rPET is the material of choice for a range of applications including automotive, transportation, building and construction, industrial packaging / graphical displays, furniture and much more. One industry in particular where the mechanical properties and weight of a material solution can prove the difference between winning and losing is within motorsport.

EconCore’s rPET honeycomb cores are currently being used by Formula Electric Belgium within the front wings of their race car. The team of engineering students produced the front wing skin out of natural flax fibre. Last year, the team used carbon fibre reinforced composites for the skins of the wing profile and in order to give the wings greater stiffness, they required aluminium stiffeners similar to those found in airplane wings.

For their front wing design, Formula Electric Belgium required a thermoplastic material as it would have to be thermoformed. For the thermoforming of the rPET cores the Formula Electric Belgium team started with constant thickness to shape into the wing, using heated moulds to press the core into shape. Not only did the rPET honeycomb core find its place within the aerodynamics package, the entire undertray of the 220kg race car was also produced from EconCore’s rPET honeycomb cores.

By optimising the use of rPET honeycomb technology the Formula Electric Belgium team have been able to reduce the wings weight by 26% compared to the same size wing from last year. The lightweight front wing component is also high in rigidity, capable of withstanding forces equivalent to almost 1000 times its own weight. The Titan race car has undergone multiple tests within its various stages of development, under a three-point bending test the wing was capable of withstanding 46kg of force.

For the 2022 season, Formula Electric Belgium’s use of lightweight materials has enabled them to produce a race car which offers a total weight of only 220kg. As the founder of Lotus Cars, Colin Chapman famously once said “adding power makes you faster on the straights, subtracting weight makes you faster everywhere”, but Formula Electric Belgium certainly aren’t lacking on power either with their race car achieving a 0-100kmh time of 2.5 seconds.

Throughout the development stages EconCore opened up their doors to the Formula Electric Belgium team allowing them to use their testing equipment to evaluate the strength of the material, which proved crucial to the entire development process.

Wouter Winant, Technical Manager at EconCore said: “With the rPET honeycomb core, Formula Electric Belgium were able to produce a highly rigid, lightweight front wing component which weighed in at only 50 grams. And at the same time this shows that achieving optimal performance is possible with sustainable materials. Our rPET honeycomb core technology is available to be licensed for a variety of applications and Formula Electric Belgium have perfectly demonstrated the material’s versatility. “

Formula Electric Belgium has been bringing together aspiring engineers from Katholieke Universiteit Leuven, UGent, UHasselt, UCLouvain and Thomas More University in Belgium for the last 12 years. The program was initially set up to provide engineering students with a real-world working environment to grow their technical skills by building complete race cars every year to compete in the worldwide Formula Student competitions.

The Titan race car was showcased at the launch event on the 24th of May 2022 to over 300 attendees, including Formula Electric Belgium partners and other Belgium University teams taking part in the Formula Student competitions. The next steps for the race car are to undergo testing and set-up sessions prior to the first competitive race in the Netherlands in July, followed by further races in Hungary and Croatia in August.

For the competitions themselves the Formula Electric Belgium team will put their race car through a range of dynamic and static events which they will be scored on. The dynamic events include acceleration, skid pad, autocross and endurance, whilst the static events are cost analysis, design analysis and business plan presentation. The competition isn’t only about how the cars perform but also the innovative approach that each team has undertaken in the design and manufacture of their vehicle.

Karel Van Wambeke, Aerodynamics Engineer at Formula Electric Belgium said: “The rPET honeycomb core was an exciting and interesting material to work with and the entire EconCore team were enthusiastic in supporting us whilst we used their facilities. We can’t wait to put our hard work to the test and see how we perform in our first competition in the Netherlands in July.”

EconCore’s rPET honeycomb technology demonstrates how mechanical properties and performance can be achieved sustainably. The Belgium based company was announced today (31st May 2022) as the winner of a European Green Award in the Green Innovation Award category.  RPET honeycomb core technology was also recently accredited with the highly prestigious Solar Impulse Label, a trustworthy and reliable certification of quality which highlights the importance of investing in clean technologies as an economic and industrial opportunity.