A premium car that customers will truly want, achieved in an Fuel Cell Electric Vehicle (FCEV). This system run on hydrogen, a fuel that can be produced from various energy sources and contributes to preservation of the global environment and reinforcing energy security. They are the ultimate eco-cars, offering long cruising ranges with a short refueling time and generating zero emissions. 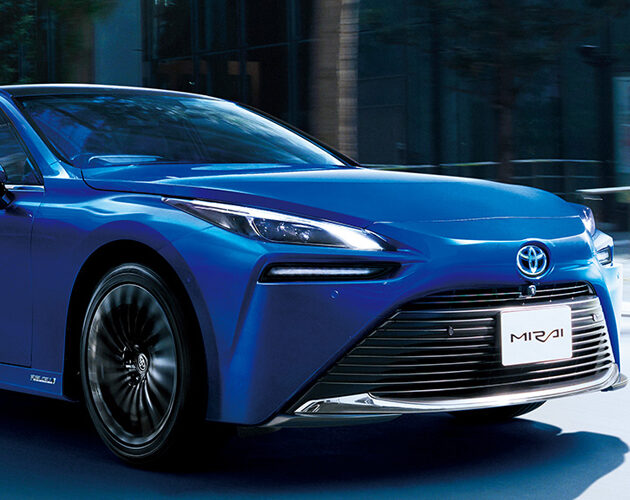 The first-generation Mirai, launched in 2014, was a revolutionary FCEV and a global forerunner in mass production. During the early stages of the Mirai’s introduction, there was limited supply capacity, and customers made various requests including a larger seating capacity and longer cruising range.

In response, Toyota set a target for the all-new Mirai to create a “premium car that will make customers think that ‘this is a high-quality car that I truly want’ immediately upon seeing it, while driving, and after they complete a trip,” while maintaining its status as an FCEV.

Hydrogen use has progressed in various forms with the aim of creating a low-carbon and decarbonized economy, and Toyota plans to use new fuel cell (FC) systems that pursue compact size, efficiency, and productivity in the means of mobility that support society including trucks and buses, and contribute to the expanded use of hydrogen.

The new Mirai is equipped with three hydrogen tanks

The new Mirai is equipped with three hydrogen tanks, one more than the previous model, to extend its cruising range. This is an issue that is important for the widespread adoption of FCVs. Toyoda Gosei produces the third high pressure hydrogen tank*, which is located in the rear of the new Mirai, while Toyota continues to produce the other two.

The company received the Technology & Development Award from Toyota Motor Corporation for the development of high pressure hydrogen tanks used on the new Mirai.

Toyoda Gosei developed the new tank together with Toyota Motor Corporation. For the new tanks, improvements have been made in the materials used in the carbon fiber reinforced plastic layer, one of the three layers of the tank wall (layer to withstand high pressure), production methods and other factors.

As a result, the hydrogen storage efficiency of the tank, which is the ratio of the mass of stored hydrogen to the mass of the tank, was increased about 10 percent by minimizing the wall thickness to increase the inner volume while maintaining the pressure resistance strength.

Toyoda Gosei will continue to develop products leveraging its core technologies of rubber and plastic with the aim of supporting the spread of electrified vehicles such as electric vehicles (EVs) and FCVs.

*The production started from November 2020 at the Inabe Plant (Inabe, Mie prefecture, Japan) which was established as a dedicated plant for high pressure hydrogen tanks.

The all-new Mirai is already available at your favorite Toyota vehicle dealers, from 67 900 €.