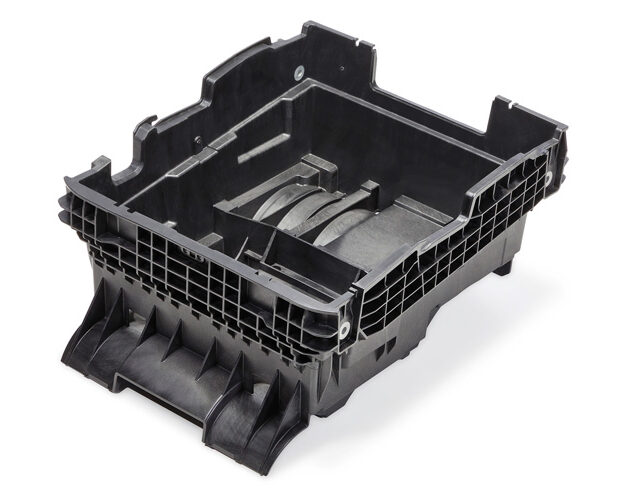 “Our material and our comprehensive process and structural simulations have helped to ensure that the carrier does not have to be reinforced with heavy and expensive metal inserts, in contrast to a DLFT composite design variant based on polypropylene. As a result, the component is around 35 percent lighter and much cheaper to manufacture,” says Dr. Matthias Theunissen, an expert in lightweight design in plastics application development at Lanxess.

The component carrier is used in multiple truck models and takes the form of a trough with a cover. It is fastened to just four points at the center of the truck’s ladder frame and performs a number of tasks. For example, it holds two batteries weighing 75 kilograms each, as well as three compressed-air tanks, each of which tips the scales at around 7 kilograms. The structural component is exposed to considerable acceleration forces over a vehicle service life of approximately 1.2 million kilometers. These dynamic forces plus the high weight of the entire assembly and the small number of fastening points mean that it is subject to significant mechanical loads.

To obviate the need for costly metal reinforcement, BBP and Lanxess worked together to devise concept ideas for a purely injection-molded component that would be capable of withstanding the high dynamic loads. In addition to design proposals, Lanxess contributed its expertise in simulations for structural component design. One particular challenge along the way was fastening the component to just a few points on the ladder frame and designing these fastenings to be capable of bearing the necessary loads.

“When we were making the calculations, we had the benefit of being able to draw on our extensive process expertise in matters of injection molding. For example, we used a process simulation to determine how the short glass fibers orient themselves locally during injection molding, which leads to direction-dependent mechanical component properties. We then fed the data from that into the structural simulation, which helped to make precise predictions about the mechanical behavior of the component and, in turn, to optimize it,” says Frank Lutter, CAE specialist at Lanxess.

Injection-molding the carrier offers a number of advantages over DLFT-based manufacturing. For example, fiber orientation, wall thickness and warpage are all easier to reproduce. Production also lends itself better to automation, and cycle times are shorter and more efficient. The material used is the Durethan BKV35H2.0 901510 polyamide 6 compound, reinforced with 35 weight percent short glass fibers.