The flax bridge for pedestrians and cyclists will be inaugurated during the Floriade International Horticultural Exhibition in Almere on April 22nd. 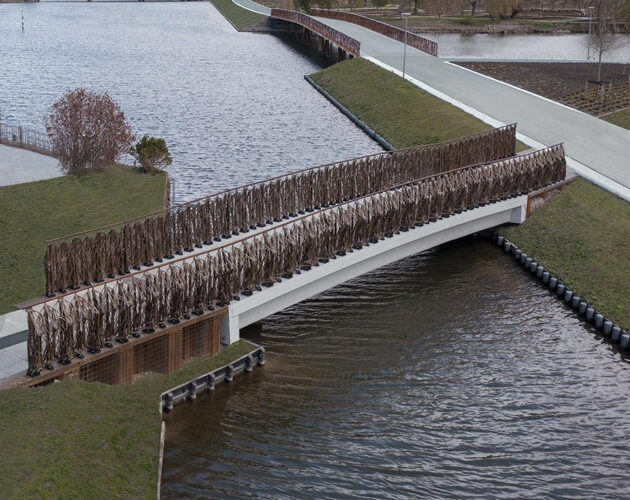 Flax is a material that has been with us for thousands of years in the form of clothing, sacks, and ropes for ships. Nowadays, this old material has been ‘rediscovered’, and could become the building material of the future. The Eindhoven University of Technology-led EU project ‘Smart Circular Bridge’ recognizes this potential by building three city bridges made from a bio-composite material consisting of flax and a special bio-resin. This material is light and highly stable with properties comparable to aluminum or light steel. The first city bridge is now in place in Almere.

“I remember that bridge with great fondness,” recalls Rijk Blok of the Department of Built Environment at TU/e. “It was an exciting time for all involved in the project, and a great way to explore the possibility of making structures with bio-composite materials.”

“Biocomposites hold enormous potential for a bio-based circular economy, especially since flax, unlike wood for example, is a fast-growing plant,” says Blok. “They also offer a great opportunity for the construction industry, which has a huge CO2 footprint and immense consumption of resources, both of which need to be addressed.”

Next level starts in Almere

Fast forward to 2022, and the Eindhoven-based researcher is leading the EU-project ‘Smart Circular Bridge’. “This project is the next level, and these materials have a great future,” says Blok with a mood of optimism after the project’s halfway point. “In particular, the intensive cooperation between science, industry, and communities has given a big push to the materials development. And the next level starts in Almere.”

The pedestrian bridge in Almere is 15 meters in length and can easily carry the weight of 275 people at once, and has been realized at the Floriade 2022 International Horticulture Exhibition in Almere. The bridge connects two parts of the exhibition.

“The construction of the bridge in Almere make us optimistic: we expect to build bridges with significantly larger spans and higher loads in the future,” says Patrick Teuffel from TU Eindhoven, the lead partner in the international Smart Circular Bridge consortium.

Apart from the 100 per cent natural flax fibers, the resin used to hold the fibers together will also come from non-fossil sources as much as possible. The proportion of bioresin in the total amount of resin used is 25 per cent for the first bridge in Almere, but it will reach 60 per cent or more for the follow-up bridges. This is achieved by using waste products from bio-diesel production and recycled PET bottles.

A little help from AI

Research on bio-composites is very much ongoing, which can be assisted by monitoring the response of the materials in the bridge in real time. To achieve this, almost 100 sensors in the bridge provide data on the material’s behavior during everyday use.

“The sensors will allow us to monitor the performance of the material in specific situations,” says Blok. “For example, how does the bridge behave when 200 people walk across it at the same time? Or what happens during different seasons of the year and different weather conditions?”

Engineers can refine their material models with the data to design materials for the next bridges, as well as for other applications such as columns, façade elements, and even rotor blades for wind turbines.

Designing for the end tomorrow

With the circular economy in mind, the project is exploring the best options when it comes to disposing of the bridge materials once they have reached the end of their lifetime after many decades of use.

“We are looking at three ways of recycling materials: mechanical (shredding parts and reuse them in new products), chemical (using pyrolysis to break down larger molecules into smaller molecules), and biological recycling with fungi,” says Teuffel. “It is important that the materials service life lasts as long as possible.To achieve this, the end-of-life options are taken into account right from the start of project.”

The ‘Smart Circular Bridge’ project is a consortium of 15 partners led by Eindhoven University of Technology. The project team consists of five universities, seven innovative companies, and three municipalities.

The first bridge set up at the Floriade international horticulture exhibition in Almere, Netherlands, will be officially opened on April 22nd. Two more “Smart Circular bridges” for pedestrians and cyclists will be built in Ulm, Germany, and Bergen op Zoom, Netherlands, later in 2022 and in 2023 respectively. Through this intensive cooperation between science, industry, and local authorities, a multitude of innovations is launched.

Project “Smart Circular Bridge” is about much more than bridge construction. It is a vivid example of how innovations for climate protection and circular economy can be successfully initiated. And in the case of bridges alone, it is worth considering alternative materials, as tens of thousands of bridges have to be replaced in Europe over the coming years.

Location of the bridge

The total budget for the research, development, and construction of the three bridges is € 6.86 m, of which € 3.93 m is EU funding from Interreg North-West Europe. The timeline for the project is 2019 – 2023.