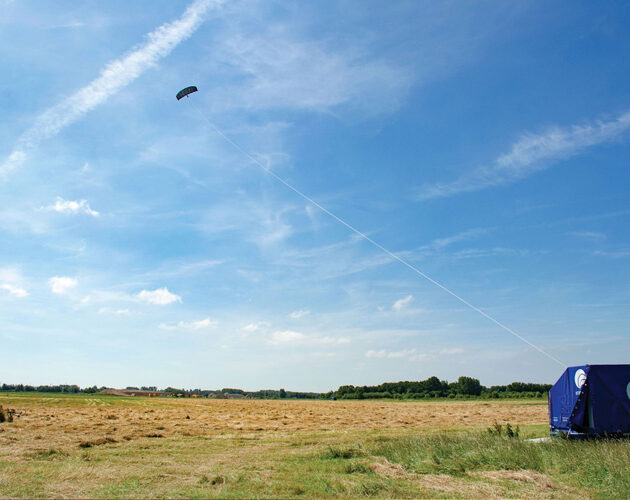 After years of development, Kitepower’s energy-generating kites have become an applicable energy-generating system. Well-known Dutch sustainability experts, the late Wubbo Ockels and the late Henk Hutting, recognized the potential of energy-generating kites early on. Years later, the renowned kitedesigner Bryan van Ostheim put their ideas into practice. Bryan and the team developed a reliable system that can generate energy even with little wind. After three successful pilots in collaboration with the Ministry of Defense and after 9 developed versions, the startup from Delft is ready to enter the market with their first mobile airborne wind system (AWES). To realize the dream of Wubbo and Henk, Johannes Peschel, CEO and co-founder of Kitepower started a pan-european crowdfunding. Meanwhile, 337 investors have joined and €400k+ is raised from the required €700K.

The journey to the future of wind energy started in 1993 when the Dutch astronaut Wubbo Ockels started his research in generating energy with kites. He has worked on this innovation for years together with other students at the TU Delft. Immediately, the potential of such an innovation became clear, however, the realization turned out to be more difficult than expected. The first working kite (20kw) became a reality in 2007, which boosted the confidence in its working potential. Two years after Ockels passed away in 2014, Kitepower was founded by co-founders Johannes Peschel, CEO Kitepower and Roland Schmehl, Associate Professor at Delft University of Technology. Until this day the startup builds upon the knowledge of the biggest pioneer from the Netherlands. The company converted Ockel’s prototype into a kite that produces 100 kW, enough to supply 150 households with energy. In the coming years they strive to expand the Kites to 200, 300 and 500 kW.

With thanks to Wubbo Ockels, the Gyro Gearloose of Dutch wind energy, Henk Hutting, got wind of Kitepower. Henk was a well-known name in the world of sustainable energy and immediately saw potential in this sustainable form of energy generation. As a result, Hutting became a consultant at Kitepower. Partly due to Hutting’s advice, Kitepower has grown to its current position. Johannes Peschel, CEO Kitepower states:

“Hutting’s confidence and advice was a huge motivation boost for the team. A common moral was created to make the world more sustainable with the use of kites. Henk became our master of persistence and perseverance and one of our biggest supporters – our own personal Churchill. We continue the legacy of Henk and Wubbo and we putted their dream of generating energy through kites into practice, thereby striving for an energy-neutral world.”

From kitesurfer to idealist

Still, Kitepower had to overcome multiple challenges. A big step towards success came when kitedesigner Bryan van Ostheim was brought onboard, says CEO Johannes Peschel: “Without Bryan, we would never have come this far. The success ratio was a combination of efforts, simulation FSI, CFD, together with the latest knowledge and the practical experiences of kitedesigners Pepijn Smit, Roland Verheul and Bryan van Ostheim. Bryan had been developing kites that could operate even with little wind for eight years already; a problem that was often encountered at Kitepower.”

Kitepower quickly realized that bringing in Bryan was the right choice. Thanks to his expertise, the kites became a lot more efficient. And for Bryan, the switch to Kitepower was a dream come true.

“Combining my passion for kitesurfing and simultaneously contributing to a more sustainable world is a dream come true. The knowledge I have been able to gather through my hobby has come to great use. That makes me very proud. My input is appreciated and because of that I feel I can really contribute.” Says Bryan van Ostheim.

1. Ground Station (GS): Converts the mechanical energy of the kite into electrical power and reels the kite in by using the generator as a motor.
2. Tether: A Dyneema® line is used for a lightweight and strong connection between the kite and the GS.
3. Kite Control Unit (KCU): Controls the roll, pitch, and yaw of the kite and takes care of the communications between the sensor unit placed on the kite and the GS.
4. Kite: Consists of a hybrid between an inflatable and a fixed fibre-glass skeleton, forming the best combination for a strong and lightweight wing.

Phase 1: Reel Out – Energy Production
Energy is generated during the first phase when the kite is flown in a cross-wind figure of eight pattern to achieve a high pulling force and reel out the tether from the winch in the ground station. During reel-out the Kitepower Falcon produces 130kW throughout 80% of the cycle’s time.

When the max tether length is reached, the kite’s profile is adjusted in order to reel-in the tether with low force, using a small fraction of the energy produced in the previous phase. During reel-in the Kitepower Falcon consumes 20kW throughout 20% of the cycle’s time.

The electricity generation works in two phases, which repeated in continuous cycles result in positive net energy output. The energy generated by the system while reeling out is greater than the energy consumed to reel the kite back in.