CDK Technologies has enjoyed steady growth for the past 5 years thanks to the recognition of its main clients and its positioning as a global builder in the domain of large-scale high-performance composite parts. With the recent buyback by the investment fund Inspiring Sport Capital, the project is to develop what is a major project in the field of offshore racing. As part of this ambitious growth project, Cyril Abiteboul, CEO of Renault F1 Team from 2015 to 2021, was appointed CEO of CDK Technologies. He succeeds Philippe Facque, who is retiring. Historically a composite structure specialist, CDK Technologies is now capable of fulfilling orders for all the high-performance technical parts that make up a racing yacht. 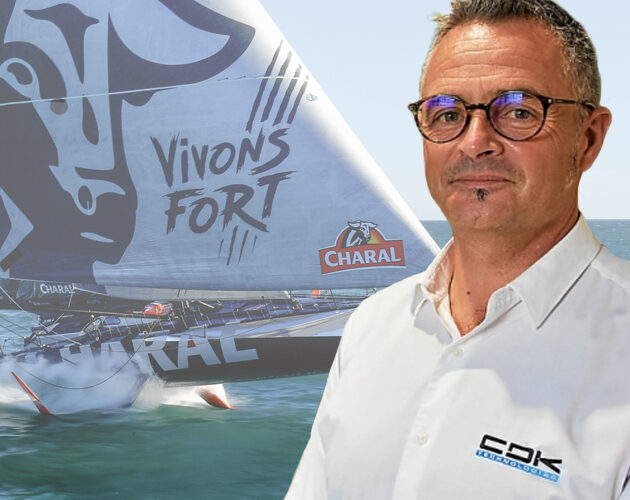 JEC Composites Magazine : Can you introduce CDK Technologies and tell us about the role that composite materials play in your quest for high performance?
Yann Dollo : “Today, CDK Technologies boasts more than 35 years of experience building monohull and multihull yachts that have gone on to win the greatest ocean races that exist. The shipbuilding yard leads the way in the field of offshore races, in particular as a result of its mastery of the construction of sailing hydrofoils. It has been successful in applying this know-how to luxury yacht platforms and high-performing industrial parts made from composites. The company now employs a staff of nearly 100, records 10 million euros in sales, and never stops expanding by investing in cutting-edge tools. With locations in Lorient and Portla- Forêt, France, in the heart of the Bretagne Sailing Valley©, CDK Technologies builds ships and produces technically sophisticated one-off parts individually (masts, booms, foils, industrial parts). Diversification opens up new perspectives in industry, civil and military naval shipbuilding, defence and even marine renewable energies. The cumulative prize list for ships that have been built by the yard in IMOCA and Ultime classes is impressive. These include five victories in the Vendée Globe out of the nine editions of this race. To these successes in ocean racing competitions comes the record held by François Gabart since 2017 for the St. Exupéry trophy given for to the winner of the solo round-the-world sailing race. The skipper’s MACIF Trimaran left the CDK yard in 2015. CDK Technologies has developed alongside high-performance composites, and especially carbon/epoxy prepreg technologies.”

JEC Composites Magazine : How are the development and production of vessels for top-level competitions orchestrated? What place do composites hold in the dialogue between players on projects like these?
Yann Dollo : “Racing teams are the customers who are financed through sponsorships or corporate patronage. They contract out to three main players: the architecture firm, the structural design office, and the shipyard. The latter plays a central role in the value chain of this system. These players work in complete symbiosis for the one to two years it takes to design and build an offshore IMOCA- class or multihull Ultime-class racing yacht. Composites make up 60 to 80 percent of the mass of the finished ship – and are the heart of its performance. CDK Technologies teams are continually involved in the process – they give a verdict on the feasibility of concepts designed, by capitalising on their vast experience building high-performance composite parts and structures. CDK Technologies is therefore central to optimisation of the concepts invented by designers.”

JEC Composites Magazine : What specific stresses are they subject to when it comes to offshore racing (fatigue resistance in particular)?
Yann Dollo : “Ocean racing is a micro-niche affair that revolves entirely around performance. It does not have a critical mass that allows large-scale prototypes to be financed. The very nature of the activity consists therefore in fine-tuning full scale models that are essentially prototypes, doing our best to forecast the stress to which they will be subjected during an actual race. The speeds that these boats reach has crossed an important milestone because of adjustments made to the foils (increasing top speed by 20- 30%), the energy dissipated into the composite structures and the dynamic structural loading frequencies have changed radically. This translates into a new trend in the design of the planing bottom in particular. More and more, these make use of the construction techniques for monolithic carbon with stiffeners (to complement the usual sandwich hulls). CDK Technologies can therefore stand out from its competitors by highlighting its know-how on oversized composite parts curing in autoclave.”

JEC Composites Magazine : “The Bretagne Sailing Valley©” has been around for 30 years now. How did CDK Technologies join this local industrial cluster, and with what aim? What are the main benefits that you’ve reaped?
Yann Dollo : “The offshore racing ecosystem is quite particular in that it is made up of a multitude of very small, and small and medium enterprises (SME) in high tech focused fully on improving performance. The notion of a “Sailing Valley” emerged in the 2000s, driven by a reorganisation of the submarine base in Lorient, which has become the barycentre of this performance-oriented economy. It so happened that players were already operating as an informal cluster from the time when the first offshore racing boats made out of composites were in gestation, in the 80s. CDK Technologies is one of the biggest companies in this cluster, and its status as a shipbuilding facility from where yachts leave the yard ready to sail makes it a standard bearer for this ecosystem concentrated in southern Brittany. While this cluster is local, it has an international reach.”

JEC Composites Magazine : What is it that draws foreign stakeholders to your teams? (Experience, know-how, materials processes, etc.)
Yann Dollo : “Marketing this cluster as being part of the “Bretagne Sailing Valley©” has hoisted this competence centre to the global level in terms of visibility, and strengthened connections and cooperation between stakeholders. The dense geographical concentration of these skills within a radius of 50 km around Lorient makes the economic power and the unique know-how of this system even more visible. The legs of international races like the Volvo Ocean Race and conferences between global players in offshore racing like the Yacht Racing Forum in Lorient have made it possible to promote the French offshore racing economy internationally. It’s events like these that have made signing the agreement to build the IMOCA 11th Hour a reality for CDK Technologies. As CDK ships have won the Vendée Globe five times, the American team sought out the shipyard’s expertise in building 60-feet monohulls.”

JEC Composites Magazine : In a sector that’s highly competitive, how does being in competition with other members of the cluster work? Have you ever joined forces to land an outside contract?
Yann Dollo : “Within the cluster, there’s healthy competition between members. We find ourselves in competition on certain projects, but more often than not are partners in build projects, because our customers’ ambitious goals when it comes to schedule frequently leads to subcontracting out some components (tooling, parts of structures, decks, floats, etc.). CDK Technologies’ size enables it to retain the role of prime contractor on the projects it is awarded, for example, as was the case most recently for the Ultime Banque Populaire XI trimaran.

This type of commercial relationship inevitably leads to technical cooperation that strengthens the competitiveness of the cluster’s members. As a result of this collective intelligence, we formed a consortium with our partners Multiplast, Lorima, SMM Technologies and Avel Robotics. This allows us to propose solutions to major contracting parties like les Chantiers de l’Atlantique in western France. The idea is to apply solutions from offshore racing to mast production, bringing advances from the future of sailing craft to the ships used for passenger transportation. Since their first appearance, the usage and design of foils has evolved quite a bit.”

JEC Composites Magazine : What do you consider to be the steps that brought them to their full potential in terms of performance on racing yachts? Have they arrived, or do you anticipate that further progress will be made?
Yann Dollo : “This technical solution has experienced a revolution due to the impact of the America’s Cup, in parallel to the rapid evolution in knowledge on how to implement high-performing composites. In 2016, in the field of offshore racing, authorisation of foils on the IMOCA craft participating in the Vendée Globe marked a revolution for the age-old class whose sailboats were all starting to look the same. This innovation has widened the scope of design for hulls and foils, with architects offering up very different technical solutions. On IMOCAclass craft, these appendages have developed significantly in size since 2016, mainly because mastery of their production has ramped up. The first foils of the 2016 generation often required mechanical joints to be inserted to allow the loads to pass through high stress zones (the elbows in particular). CDK Technologies made significant investments in digital tools to simulate lay-up of plies, in digital cutting tools for woven fabrics, but above all in a very large autoclave (4mX25m 10 Bars 200°C) that makes it possible to produce these parts in only one piece. It’s unique in the industry and enables the company to produce foils for Ultime-class multihull craft. The life cycle of composite materials in yachting and the marine industry is at the heart of today’s concerns, and particularly for IMOCA-class craft.”

JEC Composites Magazine : What strategy is CDK Technologies pursuing in this area? What initiatives materialise this strategy?
Yann Dollo : “At the same time as the IMOCA 11th Hour was being built (launched in 2021), CDK Technologies performed a life cycle assessment of the build in partnership with the 11th Hour Racing Team. This work served as a basis for evolution of the class, which now sets out a quantity of recyclable materials to be integrated into the construction process. For the team that chooses to integrate these new materials, this approach is accomplished through focusing on performance. Concurrently, CDK Technologies is also working on solutions for reusing carbon scrap and waste from the building process, in conjunction with local partners. These include both reuse and recycling of materials. The idea of “soft” or sustainable, maritime mobility is becoming the focus of more and more projects.”

JEC Composites Magazine : How is this field of application benefiting from the technologies and know-how acquired by offshore racing? What is CDK Technologies’ ambition in this area?
Yann Dollo : “On one hand, the pursuit of performance in offshore racing focuses essentially on optimising the sail propulsion of ships, and on decreasing their fluid resistance (hydrodynamic drag) on the other. The advent of flying boats is the perfect illustration of these two primary lines of progress. The major innovations revolving around rigs, and especially thanks to high-performing composites, have allowed rigid sails to be developed which are much more efficient than those with flexible profiles. As to the progress made on foils, this enables the racing craft’s fluid resistance to be reduced tremendously. Thanks to the development of these technologies in the heart of our market, CDK Technologies is now able to offer efficient solutions that can be transferred to the area of seagoing mobility aiming for a low environmental impact. We feel as if we’re taking part in a true disruption that will positively impact the entire field of water transport. This constitutes a major development focus for CDK Technologies.”