ZAG skis for a smooth ride

Winter is just around the corner and soon we’ll be able to enjoy the thrill of sliding down snowy mountainsides again. Nothing really beats the pleasure that we get from skiing through untouched powder and following our friends through the trees. 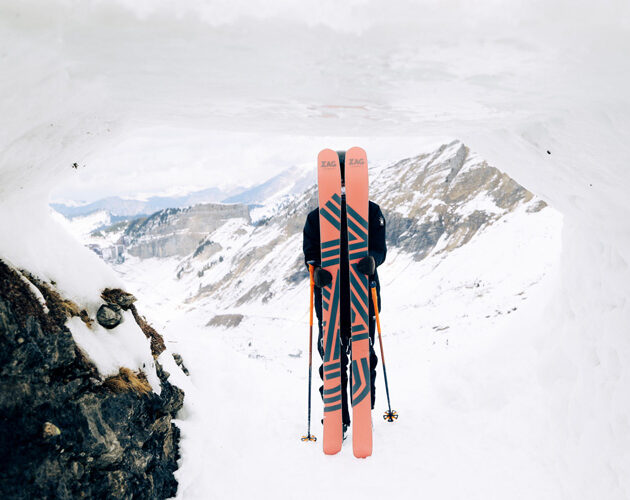 Born and bred in Chamonix

ZAG Skis from the French Alps know a thing or two about skiing and making the perfect tools for the job. Based in Chamonix, they have some of the best testing grounds one could imagine just outside their ZAG Lab. Building prototypes one day, just to go and test them in the most challenging and striking mountain terrain on the next one, allows them to continually optimise the performance of their skis. ZAG is celebrating their 20th anniversary this winter and they are far from slowing down any time soon.

The power of flax fibres

Ski construction hasn’t seen too many revolutionary changes over the past years but incremental improvements in all areas still mean that the level of performance has never been higher. The trend of lightweight freeride- and so-called freetouring skis has started to reach a level of maturity that put an end to the race for always lighter skis. While the low weight of a carbon fibre reinforced ski with a light wood core is highly appreciated on the way up, it will start to reveal its drawbacks as soon as you take it into some variable and icy conditions. The light and stiff ski struggles to deal with the typical vibrations and passes them onto the skier in a very direct way that is often described as a chattery feeling.

ZAG Skis is collaborating with Bcomp and uses our high-performance ampliTex™ flax fibre composite reinforcements across the SLAP collection. ampliTex™ has proven its unique performance and sustainability benefits in applications from McLaren Racing’s F1 seats all the way to satellite panels built together with the European Space Agency.

Incorporating Bcomp’s ampliTex™ flax fibres into the SLAP range of skis has allowed ZAG to create a very calm and smooth ski that is still light enough to earn your turns. ampliTex™ harnesses the inherent mechanical properties of flax fibres to provide 250% higher vibration damping than carbon fibres. As the result of countless R&D hours in the ZAG Lab, their engineers have found the perfect recipe with ampliTex™ flax fibre reinforcements to satisfy every type of free rider.

Strohm wins second TCP ‘Jumpers on Demand’ contract for ExxonMobil in the Ame...